When researching for minimalism used in art I found an interesting article on Piet Mondrian. He is recognized for the purity of his abstractions and methodical practice by which he arrived at them. He radically simplified the elements of his paintings to reflect what he saw as the spiritual order underlying the visible world, creating a clear, universal aesthetic language within his canvases.

In his best known paintings from the 1920s, Mondrian reduced his shapes to lines and rectangles and his palette to fundamental basics pushing past references to the outside world toward pure abstraction. His use of asymmetrical balance and a simplified pictorial vocabulary were crucial in the development of modern art, and his iconic abstract works remain influential in design and familiar in popular culture to this day. 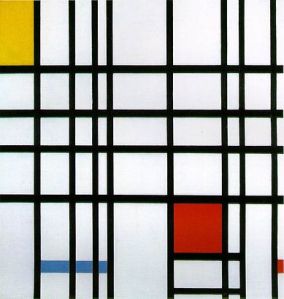