Recently, Creativebloq.com asked top creative professionals what they predict for 2013.

One that caught my eye was number 3, ‘stripping it back’

“A lot of brands redesigned their logos this year to be extremely minimal,” says Lee Crutchley. “Microsoft, ebay, Starbucks, and others have done it. I think a lot of that was to make people talk about the brand, as well as being a stylistic trend.”

He continues: “I think 2013 will see an extension of that trend, with more brands stripping back their logos because of the increased versatility that it brings. A simple one-colour logo can look good on anything from a solid block of colour, to a photograph, to a busy pattern. Whereas a heavily stylised logo tends to have more influence over the rest of the design.”

It seems as though 2012 has kickstarted a KISS – Keep it Simple, Stupid – philosophy amongst brands, which can only be a good thing (as long as the mark is executed correctly, of course).” Carney 2012

This shows that minimalism is a growing trend and more companies are likely to take this route due to the versatility of these types of designs. The KISS principle (articulated by Kelly Johnson) states that most systems work best if they are kept simple rather than made complex.

I also carried out a brief bit of research on Lee Crutchley to ensure his opinion is valid. He works on design, illustration and art, with a common theme and focus on words and lettering. He has designed books, tshirts, cards etc. 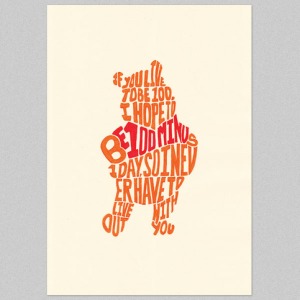