Air Line safety cards are used to communicate to the public how to safely deal with an emergency while on the plane. These tend to communicate via sequential images without the use of text as the audience is likely to be international.

There are also other means of transport that use this method of communicating safety messages, such as this train example:

The history of Sequential images:

First evidence was during Palaeolithic period, which consisted of pictures on rocks or in side caves. It was found that these images informed about the game that was being hunted.

Then, it was the Egyptians. They developed Hieroglyphics, which combined complex symbolism with the earliest forms of written communication.

Another historically important illustration produced was  Bayeux Tapestry.  A continuous sequence of pictorial narratives and descriptions, which allowed people to visualise the Norman invasion in 1066. 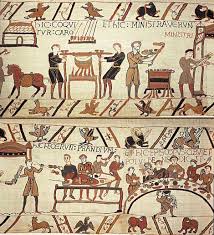 The book, Illustration – A Theoretical & Contextual Perspective (2007) by Alan Male also explains that although individuals have the ability to read images in sequence but it is still important to consider and ensure the narrative pace and flow of the images correlate both visually and thematically.

Pace is an important factor to consider when creating a sequence of images to ensure it is understood by the reader.

As a visual language the potential of the sequential imagery is enormous and the digital technology allows this method of visual communication to develop greatly. However, we should still be inspired by traditional comic books and animated films.